» SHVOONG » English » My first half marathon: "The first kilometer from the moment you get up from the couch is the hardest of all"

Maya Ronen talks about the process she went through from the moment she took the first step in the training program until she finished her first half marathon last Friday. This is the story of her journey about the fears, the thoughts, the night before and what she went through throughout the competition to the finish line
Facebook
Twitter
Telegram
WhatsApp

At three in the morning, as I lay awake in bed the night before my first half marathon, two thoughts went through my mind: The first was that the pasta meal a mistake? The second thought was would I be able to finish 21.1km for the first time in my life? 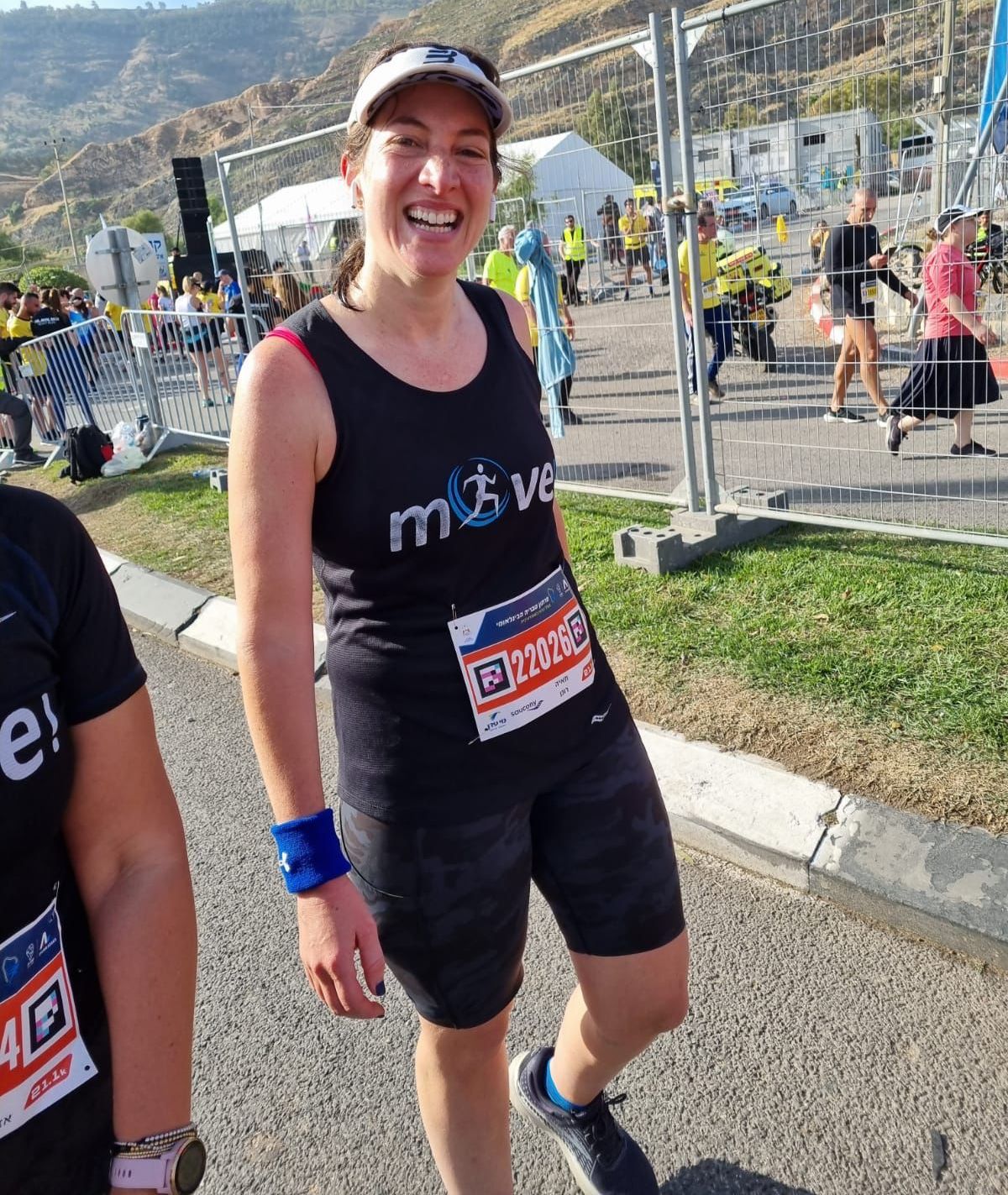 "I have felt proud of all the last few months." Maya Ronen Photo: Courtesy of Maya Ronen

I actually fell asleep early around nine in the evening, with no butterflies of excitement. Then at one in the morning, high-volume music outside the hotel, which went on and on took my sleep away and instilled doubts in my heart. At the hotel reception they promised to send security to find out the source of danger, but without success.

I tried to go back to sleep listening to podcasts, meditations, and I remembered that episode of Seinfeld, where Jerry wants to help a marathon runner wake up in time for the New York Marathon, things get complicated and end with one particularly hot cup of tea. Eventually around three-thirty sleep knocked on my door again, and with it a dream that I forgot to organize everything I needed. Going back and forth from the starting line to get the race number, the gel, the shoes. To my delight, when the clock rang at five in the morning, I discovered that I had enough time to get organized in peace.

While drinking coffee, I thought about the fact that I'm here thanks to the corona. Like many, I started running with the outbreak of the pandemic. I downloaded an app from " From Armchair Sweet Potato to 5 miles " and slowly reached my destination. I really liked the Nike app with the guided runs and runs that include calls from their sponsored athletes. Overall, I discovered a wonderful world of content around running. Podcasts like "Talking Pace" and others from abroad, articles upon articles on various websites, Facebook groups that create a community of runners. I was happy to run along with friends and earn an hour of conversation free of distractions.

A 10km run became a habit, but I felt that if I wanted to take the next step correctly and safely, I should join a team and training with a coach. Slowly. I had no thoughts of a half marathon, it seemed too too far. But Michal suggested, and I decided to flow with Dudu Tessa's masterful line playing in my head: "Better a glorious failure than dreams in a drawer."

At the same time, I studied for the final exams in medicine, and discovered that the two routes I was taking were remarkably similar. Before each of these huge exams, when my friends Itamar and I went through the thousands of pages of summaries, we had no idea how the hell we would overcome this amount of material and how we would pass the exam. And each time we told ourselves: Trust the process, that is, if we meet every day at eight o'clock, sit down to study, be focused, in the end we will succeed. By and large, the ability was there, what is important in order to realize the potential, is perseverance. Running suited my character as someone who loves measurable goals and a sense of progress and achievement. Test and test and test. Mile and mile and mile. If you do, you will succeed .

"No one is born a marathon runner"

Everyone was at every one of the stages at one time or another. No one was born a marathon runner, and they all started from their first and slowest mile. This fact is a broad base for advice, encouragement and support. In addition, it is inspiring, to see each and every one of the team members practice and work towards achieving the goal . Michal, the excellent coach, knows exactly how to motivate everyone to action, when to say each word, and to push forward to a goal that is achievable with a clear plan that works.

It was wonderful to get to the "performance hill" in Park Hayarkon every Monday and Wednesday at a quarter to six in the morning and see the parking lot full of people coming to run and ride bikes, no matter if it was cold or hot or raining. Each group and its vibe. The last mornings at the "performance hill" were already really cold, and I was afraid that was what awaited us in Tiberias. Surprisingly, the weather for the half marathon runners was perfect from the first second, and it was possible to run with shorts and a tank top, without planning a multi-layered approach.

On the way to the starting point, I met Dr. Osnat Levzion-Korach, director of Shamir-Assaf Harofeh Hospital. A few weeks before, she participated in the Iron Woman Half Competition held in Tiberias and this time ran a half marathon. Contrary to my shy nature, I approached her and told her she was inspiring. I told her that I was starting an internship at Assaf Harofeh in February, and I told her that I hoped I would be able to continue running as a doctor as well. She assured me it was entirely possible and gave me a hug for success.

After some group photos it's time to run. To my delight, my husband Uri joined me. The difference in character between us is also reflected in our perception of running. I love when I have an accurate and clear plan for every run. He prefers the unpaved track, wherever you take it, and without planning ahead. It's the same in life itself, and maybe that's why our combination works, because we balance each other. 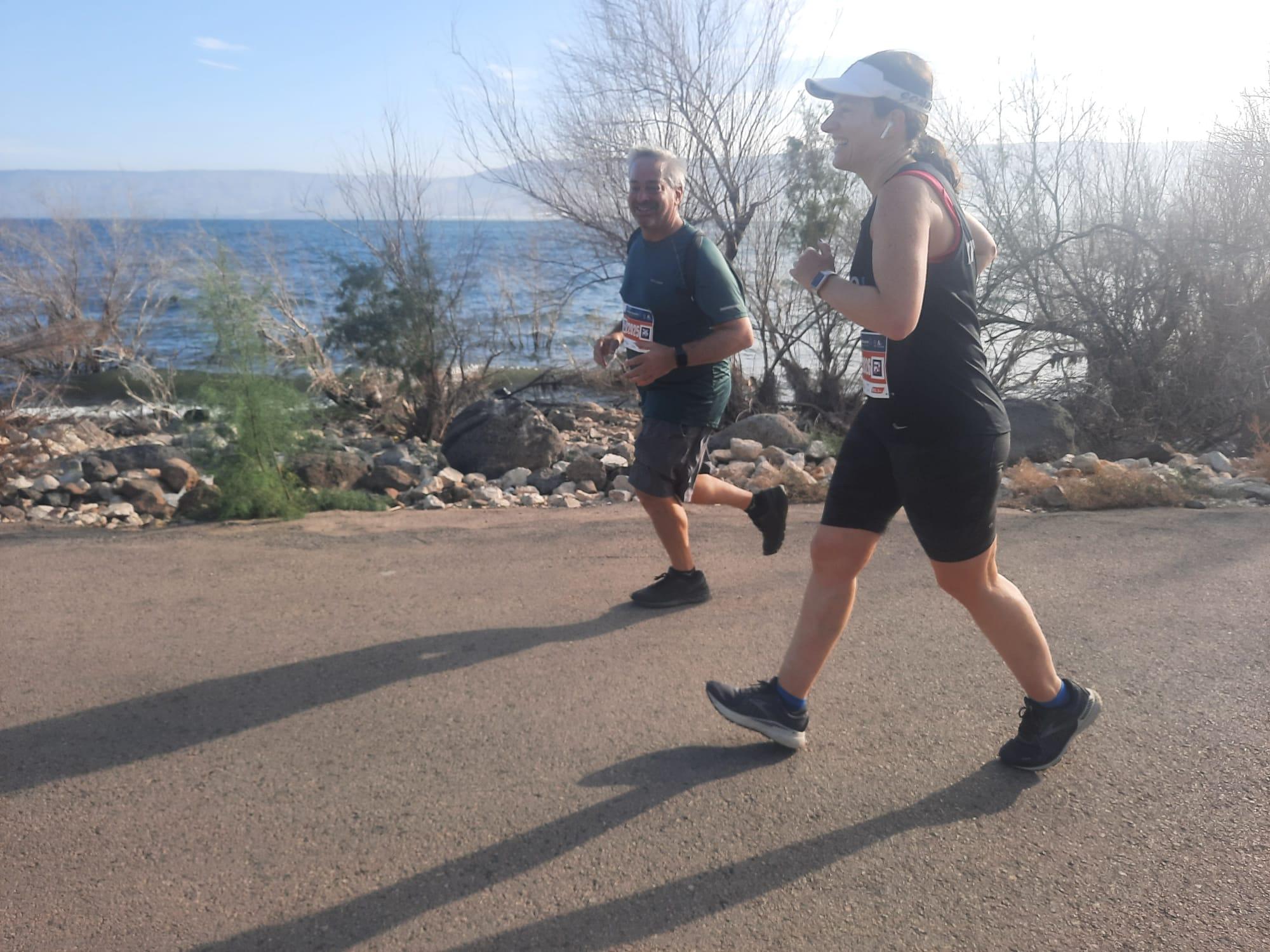 "I enjoyed running and watching the spectacular view of the Sea of ​​Galilee." Maya Ronen Photo: Schwung System

Anyway, in this run in Tiberias he promised that he would do what I say… Along with us also ran Liron, a member of my team. For the first few minutes all I thought about was sticking to the original plan and not getting carried away with the energies of the start of the race and the hundreds of runners around me. My friends from the sports channel, Uri and Eitan, are experienced runners, and over the past week I have been repeatedly warned not to be tempted to pace too fast at first so that I do not burn at the end. I have good discipline, and even though my body felt great, I did not let it gallop forward. I enjoyed running with Uri and Liron, and observing the spectacular view of the Sea of ​​Galilee that was spread out and close to us along the entire route.

Later we saw the faster team members, making their way back, and their encouragement lifted the mood. At the 15th kilometer, Liron felt that she was able to increase her pace, and I was really happy for her. I felt a certain fatigue in my legs, and I was afraid that if I increased, I would have no fuel left to get to the end. My longest run before Tiberias was 19 km, and mentally I was interested in dealing with the unknown. On the one hand, a personal record with each step, and on the other hand – am I really capable of doing it? I had no self-flagellation about inability Speed ​​up. I remembered what I heard on one of the great long-distance runners, Eliud Kipchuge: Be kind to yourself. It's a good rule of thumb.

By the last mile I already realized that without a doubt, I'll do it. I increased the pace, and when I saw the finish line I just smiled all the last few meters. I felt proud of all the last few months, and of another goal I had managed to conquer. My parents and my two children were waiting for me excitedly, and when I look at my picture a moment after finishing, I see one thing: happiness.

I finished in a time of 2:31:02, and I'm glad the ability to get better at running is endless. I can do more strength training, put more emphasis on nutrition and of course persevere in training, and get to the next half marathon better. The fact that I was able to run 21.1 km also gives me energy even before starting work as a doctor. Remember that the first kilometer from the moment you get up from the couch is the hardest of all, and so will be the first period in hospital. The requirements and the effort. But the principle is the same – Trust the process.
In the end you will reach the desired destination.